Bridge Crew: Into the Void

Bravely face the unknown with your team at your side!

Send Us An Email

Give Us A Call

Chat By What App

Bridge Crew: Into the Void

"Become the virtual bridge crew of your own spacecraft! In this exciting and mentally stimulating sci- fi thriller activity, each of your team members must take on a separate role as part of the bridge crew – communications, engineering, captain, navigation and weapons systems. Your mission is to engage with the enigmatic entity threatening Earth known as 'The Void'. Will your team have what it takes to save the planet from annihilation?"

Participants will be divided into teams, and each team will command a ship. The ship requires each participant to assume a mission role - communications, engineering, navigation, etc. Each role will have a specified set of abilities, skills and resources at their disposal. Once oriented, the crew will be faced with a set of challenges and problems to solve as the ship moves further into the Void - a mysterious entity threatening all life on Earth.

Team members must collaborate using the strengths and skills of each role to overcome increasingly critical challenges. Teams must also be careful not to take the wrong course of action, as this may result in penalization, or potential loss of crew members.

Maximum group size is around 50. For larger groups we can host multiple sessions at the same time. Smaller teams of up to 10 are then put in virtual breakout rooms.

This  Bridge Crew Into the Void event is staged online using a combination of 'Zoom Meetings' and a selection of other software and websites, all of which are easily accessible or free to download. We can send an invitation via email containing all instructions and links prior to the event. We highly suggest installing the relevant programs and using a desktop or laptop for full experience. Tablet and smartphone access is possible but will contain less functionality. The half day program is up to 4 hours and the full day program up to 8 hours.

The Bridge Crew Into the Void will be faced with a set of challenges and problems to solve as the ship moves further into the Void. Team members must collaborate using the strengths and skills of each role to overcome increasingly critical challenges.

Your host will be tallying team scores after each challenge throughout the event and declare the virtual winner at the end during debrief.

The event briefing takes place in the central video conference room. The briefing will include a short tutorial for how to use the Video Conferencing software and best practices for operating within a group video chat. i.e. muting microphones when not speaking, looking at camera when speaking etc.

After the briefing, participants will be separated into teams and invited by the facilitator to separate chat rooms, then the lead facilitator gives further instructions and objectives for the activity.

Briefing and de-brief usually take around 15 minutes each but can be extended upon request for more in-depth analysis of team performance.

Below are three options for Bridge Crew Into the Void with different inclusions and rates all tailored to best match your budget and requirements. The Bronze option is a fixed program with few inclusions but the Silver and Gold packages include extra benefits and allow selection of some or all challenges. On the pricing page we offer further optional extras. The full day activity will have up to double the number of challenges.

- Simple version of Bridge Crew Into the Void

- One facilitator per 40 pax

- Standard version of Bridge Crew Into the Void

- One facilitator per 20 pax

+ Customised backgrounds for each team

- Standard version of Bridge Crew Into the Void

Lot of employees working from home! There is now more than ever a need for keeping your teams together. Virtual Online Team Building by TVworkshop Singapore is the best solution for improving communication between your employees in different locations and time zones.

Join our hosts and facilitators online using video conferencing software and be led through a variety of stimulating team challenges and activities. Remote Online team building will keep your employees productive and engaged no matter how far away they may be.

Help design a home improvement for village families and experience the impact via live stream friendships.

Help design ways for local people to make a living off recycling plastic and other waste.

Making it the world’s most cost-efficient sanitation system. Our goal: Safe sanitation for every village family by 2030.

Ask a TVworkshop Expert How We Can Help You

We are always ready to help you! Will get back to you within 4 hours (or even faster!). We reply every email.

Write Us An Email

Your team building outbound event in Jakarta? What to know!  October 6, 2019

How to claim PIC and Community Integration Fund for your event!  May 3, 2019

Why team bonding is important for your team

How to claim PIC & CIF Singapore

Why Vietnam is a must go for your next trip

40 best team building ideas for you

Make your own commercial

Cycling in Batam or Bintan

Top things to do and must see Batam 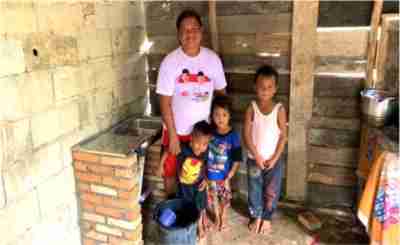